skip to main | skip to sidebar

Coming Soon, All Over Your Cochlea! 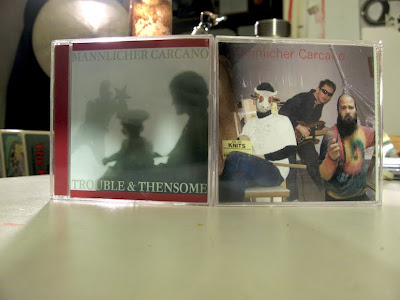 To celebrate Mannlicher Carcano’s 25th continuous year as an improvisational audio collage group, and the discovery of an unopened stack of recordable 3” mini CDs in a dumpster in Glendale, CA, redacted records is pleased to announce the release of a numbered limited edition of 50 mp3 mini CDs containing over 3 ½ hours of Mannlicher Carcano recordings spanning 1987 to 2012, including many of Mannlicher’s most beloved recordings, various out-of-print rarities, and several previously unissued gems.

Trouble & Thensome (or T ‘n’ T) is an expansion of MC’s definitively unfinished career anthology Trouble Comes in Threes, which compiled recordings from their beginnings as a noise-leaning musique concrete performance group through the early years of their weekly multi-stream radio program, to their 2001 studio collage Hunt Down & Punish -- recorded and released within a week of the 9/11 controlled demolition of the World Trade Center, in an effort to rally the populace and forestall the military incursion into the middle east which nevertheless ensued.

Trouble & Thensome substitutes the long-unavailable full 17-minute version of Hunt Down & Punish for the more familiar single version, and sets several other tracks from the original Trouble aside in order to make room for a selection of subsequent single releases, including the hypnotic Cash Out, recorded and debuted the week of Johnny Cash’s death; Indian Ned’s Song from the soundtrack to Lee Lynch’s 2012 revisionist Western film The Death of Hi Good; and (It’s) Time to Smash Things Up (for Mike Kelley), excerpted from the Jan 31, 2012 radio broadcast -- the exact time the LA-based artist and noise musician was taking his own life.

Other material added to the expanded Trouble includes the first released audio fragment from their 2004 multimedia installation/performance Mannlicher Carcano vs Nanook of the North, the ensemble’s deconstructive multimedia mashup of the first feature-length cinematic documentary from 1921; individual tracks from their first CD release in 2001 Half Duplex Receive Only [roden quote] and their 2009 long player Crawl to Safety (with Mannlicher Carcano), as well as the previously unreleased Another Finite Monkey, a live mix of some of the 90 10-second loopable micro-compositions assembled as their groundbreaking 2002 work Infinite Monkeys, originally released on the CD accompanying the band’s cover story in the prestigious new music magazine Musicworks.

Several other tracks originate from the 11 self-released cassettes issued by MC between 1987 and 1999, from which much of the original Trouble derives. As participants in the first cassette culture underground, MC released such landmark collections as Level Best, Next Best, and Honorable Mentions, but their 1994 concept cassette War Measures Act is widely regarded as their finest cassette moment.

Other excerpts on T ‘n’ T represent such experimental releases as the 1988 cassette Walpurgisnacht, each of which had a different dumpster-scavenged photograph featuring a bust of Hitler, a chunk of hash, and other objects in various arrangements as the j-card cover, and a different combination of recordings from a 6-hour live performance on April 30/May 1 that same year; and Fogwit, a 60-minute document of two specially designed turntables simultaneously playing identical funk 45s that had been meticulously distressed by the band members.

The members of Mannlicher Carcano are Porter Hall, Gogo Godot, and Really Happening -- plus more than 200 beloved adjunct band members -- including Kenneth Friendliness, The Missing Hyperlink, Christ, Pilot K9, Peas Porigiott, Lucky Breaks, Dr. Pityface, Darth Pitapants, Brudda Debuddah, Woodpity Pitywood, Mr. Supreme Neurotic, and so on to infinity -- many of whom play on this record!
Posted by DougH at 6:04 PM No comments: 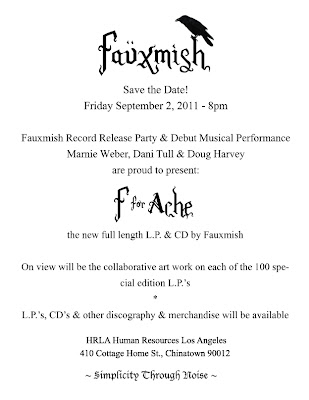 Redacted Records is proud to announce ‘F for Ache’ -- the debut release by experimental power trio Faüxmish. Faüxmish is a Los Angeles art-rock supergroup that came together over a shared engagement with American spiritual sects who remove themselves from established social norms and create their own culture as outsiders. Taking as their motto “Simplicity Through Noise,” Faüxmish have developed a practice rooted in improvisational ensemble playing using electric guitars (played with rubber mallets and other extended as well as traditional techniques) and vintage synthesizers, in various combinations of three.

Initially conceived as a ‘wall of sound,’ the group’s music rapidly developed a complex and idiosyncratic audio vocabulary drawing on the members’ widely divergent individual musical backgrounds, which range from noise to prog, post-punk to film scores, and 90s alt-rock to improvisational audio collage. The results range from dreamy ambient soundscapes to theatrical rock songs.

The music on ‘F for Ache’ is assembled from extended improvisations, which the band refers to as “feelings.” Some of these were built into songs in the studio by adding vocals, which have subsequently been incorporated into Faüxmish’s live performance repertoire. The album is being released in two different limited edition configurations
– a 12” vinyl LP in a numbered edition of 100, with a hand-silkscreened cover and a unique collaborative collage on each back cover, created by the three band members (all of whom are also professional visual artists). The LP also contains one track unavailable on the CD version.
– a limited CD edition of 500, with inlay cards individually personalized by the band members, and featuring a wealth of integrated bonus tracks.

Marnie Weber is an internationally renowned multimedia artist whose work encompasses collage, sculpture, performance, filmmaking, and music. Her recent five-year cycle of works The Spirit Girls detailed the mythic adventures of a group of deceased adolescent girls who form a rock band in the afterlife to try to communicate with the living. The project resulted in museum and gallery exhibits, live performances, several films, and a full length CD. Marnie’s cultural activities began with her tenure in The Party Boys, one of LA’s seminal post-punk groups – the original house band at downtown LA’s notorious Al’s Bar whose first album ‘No Aggro’ was released on the legendary Independent Project Records in 1981.

Dani Tull is a Los Angeles based visual artist and musician, whose work has been seen in solo exhibitions at Jack Hanley Gallery, Jessica Fredericks Fine Art, Blum & Poe, Galerie Haus Schneider Uschi Kolb, and many others. Dani’s also a legendary guitarist on the LA rock scene, having participated in numerous bands including The Spirit Girls, boygeorgemichaeljacksonbrown, Fancypants (with George Hurley and Tom Watson), and Eric Avery’s criminally underrated post-Jane’s Addiction band Polarbear, as well as extensive solo projects and performances, musical collaborations with artist Jim Shaw in Europe and America, and scoring numerous films.

Doug Harvey is an internationally exhibited visual artist, an experimental musician, a prolific independent curator, an educator, and one of the pre-eminent art critics in America. He has created a large body of solo sound art recordings and events, as well as leading or participating in such bands as Tenacious Mucoid Exudate, The Warm, The New Suicide Revolutionary Jazz Bad, The Charles Ray Experience, and Fireworks -- in addition to his 25-year long involvement with improvisational audio collage group Mannlicher Carcano and their weekly live radio broadcast. Mannlicher Carcano’s most recent release, ‘Courtesy Flush’ collected a full year’s worth of radio shows onto a single disc of mp3 files. Their first ever full-length vinyl LP ‘CORPS’ is scheduled for release on Redacted Records later this year. 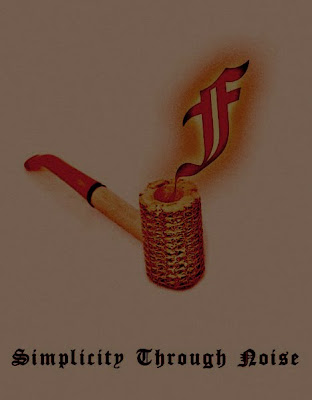 "F for Ache," the debut 12" limited edition (100 copies) vinyl LP by Faüxmish will be issued on Redacted Records on August 27, 2011. This will be Redacted Records' first vinyl release. But not its last.
Posted by DougH at 4:10 PM No comments: 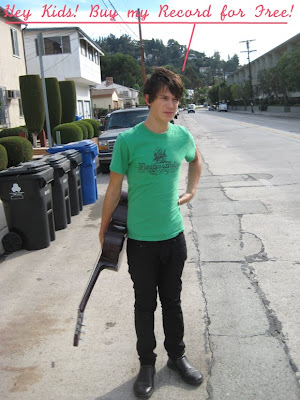 Here it is! The long-awaited anthology of recordings by future hall-of-famer Nic Waterman, 18 tracks - one for each year of his life thus far - divided between this free download from Redacted http://www.mediafire.com/file/k2unh0nzznn/NW Redacted.zip
and another free download available from Pleonasm at www.pleonasmmusic.org


"I have seen the future of industrial-tinged singer-songwriter chamber pop, and it can't make up its mind about the validity of 'artificially colored hair!'"
Brick Demeanor, Half-pint Frenzy magazine
Posted by DougH at 12:35 PM No comments: 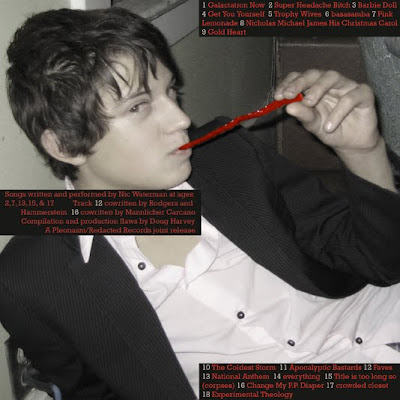